England has a reputation for gloomy, cloud-covered days of little sunshine and lots of rain. However, a small seaside community defies the meteorological forecasts common to the rest of the country. Known as the United Kingdom’s sunniest town, Eastbourne is famous for the circular Redoubt Fortress, built in 1805 to defend against Napoleon’s army. It’s also the birthplace of one of UK’s fastest runners, Bethany Woodward.

Diagnosed with cerebral palsy at 12 months old, Bethany went on to become one of her country’s most successful Paralympians. She remains a positive force in the lives of countless children through the Breathe Magic project, a program where young people with hemiplegia learn to perform magic tricks.

An amazing athlete who competes internationally and an advocate for children with cerebral palsy, Bethany Woodward is this month’s I Define Me Award winner.

Woodward was born in Eastbourne on Boxing Day (December 26th) in 1992. When she was around 12 months old, a family friend who was a physiotherapist noticed one side of her body seemed limp and suggested she might have cerebral palsy (CP). Doctors confirmed with a diagnosis of hemiplegic cerebral palsy. In this type of CP, damage to the hemisphere of the brain that controls movements manifests as paralysis on one side of the body.

Looking after eight children with varying disabilities, Woodward’s parents had their hands full. She grew up with no television and spent a large part of her time running around the forest and helping her father with chores. The Woodwards were a family who strongly believe in nutritious, organic diets and staying active through a number of activities including climbing, which Woodward began doing at the age of three.

“No-one was held back because of their disability so the environment was perfect for me.” — Bethany Woodward

She attended the Rudolf Steiner School in the New Forest Camphill Community; a community based on Christian ideals and the teachings of philosopher, Rudolf Steiner. They function to provide opportunities in an inclusive atmosphere for children with learning disabilities, special needs and mental health problems. More than just a school, these communities allow families to “live, learn and work together with others in an atmosphere of mutual respect and equality.” There are over 100 such communities scattered over four continents.

Set up To Make A Difference 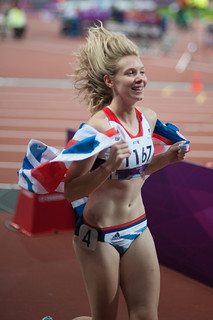 It’s clear the community in which Woodward was raised set her up for future success. Camphill gives children a chance to be more truly themselves. They are encouraged to learn to work together during activities, such as chores and performing plays. In fact, acting is what Woodward refers to as her second love. Whether performing plays or enjoying the drama from the audience, theater became a passion.

A long-time family friend, Russell Pooler, became Woodward’s curative eurythmy therapist. Therapeutic eurythmy was created in the early 20th century by Rudolf Steiner as a form of artistic expression, and soon after became an aid in children’s physical development. Based on the idea that ‘illness’ is just a launchpad for healing, therapists schooled in this practice take the whole of the person into consideration, “not only the bodily condition but also emotional and spiritual aspects.” Woodward views this therapy as a healing through movement, and it no doubt helped to stretch her muscles and gain strength.

“It was very hard to join an athletic club as a disabled athlete.”

After the family made the move to a new Camphill Community (St. Albans), Woodward got involved in athletics. Coach Tim Higman saw Woodward’s potential and trained extensively with her. She continued training till the age of seventeen, then decided to move to a place where she could train with coaches who could ready her for serious competition at an international level.

Commitment To a Cause

All the while, Woodward committed her extra time to Breathe Magic, which is run by Breathe Arts Health Research. This non-profit, along with a group of professional magicians called the Magic Circle, uses the repetitive actions involved with practicing tricks to help the young people overcome some of the limitations of their disability. It makes perfect sense. Anyone who has seen a magic act can imagine the countless hours spent practicing in order to make a trick seem magical. Magicians have amazing manual dexterity. By teaching kids with cerebral palsy how to manipulate their fingers to do a trick, they are really helping improve their muscle memory.

Woodward says Breathe Magic is important to her because the amount of improvement seen in these kids after just two weeks of practicing is astounding. She likes to see the look on family member’s faces when they see their children improve.

“The huge amount of confidence and pride they are able to get from putting themselves forward in that way and making their disability part of the showmanship is tremendous.”

The children look up to her as a role model and she inspires their competitive spirit. Many set their sights on the Paralympics after meeting her. Managing Director Yvonne Farquharson says of Woodward,

“It’s been really wonderful to have Bethany’s support as a patron… She appeared as a special guest for them and they were incredibly excited. She gave an inspirational talk as part of it about her experiences.”

When she’s not on the track running, Bethany often gives motivational speeches for businesses or at events. Along with her own story, she likes to share the triumphs of the Breathe Magic kids as a way of giving back. But when she is on the track, you know she’s gearing up for a major international competition. Currently she’s readying herself for the 2016 Paralympic Games in Rio de Janeiro, Brazil.

Bethany is one of England’s most impressive athletes, but her efforts to help other children with hemiplegia believe in themselves truly defines her as a genuine role model. We wish her the best in all future projects and are proud to name Bethany Woodward the November I Define Me Award winner.